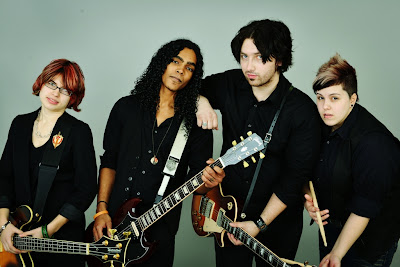 What is the mission behind Asphalt Green?

Our mission to is bring back Rock and Roll to its loud, raw, and exciting routes. Hard-rocking riffs, catchy melodies, and driving rhythms intended to capture attention of the listener.


The band is working hard in the studio on our second album release, a four-song EP tentatively called "FORGETMENOT", which is going to sound fantastic when it's done. The record is going to be a great step in the evolution and maturity of the band.

S,T,K &S is our first album which was recorded over a long, two-year period at Trading 8s Music Studio beginning in 2010. The album was released in the Spring of 2012, and was our attempt to reintroduce people to the concept of a full-length record. The songs are based around the central themes of Sin and Redemption, and is a very dynamic recording covering many genres from Hard Rock, Punk, Acoustic and Blues.

What are your ingredients for a perfect song?

I think a perfect song needs to be a balancing act, appealing to multiple kinds of people. The music needs to be polished, and have a driving momentum to capture your attention. The lyrics need to tell a story, as any good work of art should, and should take the listener on a journey. In my opinion though, melody is arguably the most important ingredient, especially on a chorus. Many people can't tell you the lyrics to their favorite pop song, but if you ask them to hum the melody, they can almost always do that. Also, a kick-ass guitar solo can never hurt!

What do you like most? Recording in a studio or being on stage?

That is a tough question, isn't it? I think it really is two separate ways of life for a musician. On stage, in front of a crowd is one of the most exhilarating experiences that can come to mind. The energy, the passion, and the volume create this intense feeling that cannot be replicated. In the studio however, you can gain a whole different appreciation for your music as you put your songs onto tape. You can hear all of the intricacies, and truly understand the songs, warts and all. You'll never be able to capture the energy and passion of a live performance, so it's important to recognize that you might need to change your perception of how a song sounds.

What are your plans for the upcoming summer?

We're looking forward to a busy busy summer! The upcoming EP will be out by the Spring, and we're excited to tour as much as we can to promote ourselves and our music. Asphalt Green will also be featuring a lot of new merchandise in the form of T-shirts, posters and stickers in the near future. A world tour in a private jet might be just around the corner! 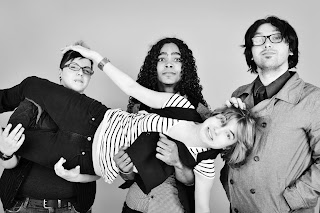 You can find our album "Sinners, Tricksters, Killers & Saints" as well as our upcoming releases on iTunes, Amazon, Bandcamp, and all other major online music stores. And you can find even more and see when we're playing next by staying in touch with us on facebook.com/asphaltgreenband
Posted by Crank Box - C. Koppers at 11:25 PM

They got some fine tunes.

Thank you for introducing them.

Great interview.
I want to see them on stage.

Thank you for the interview

Love this kind of music!

Thanks for introducing them, Chris.

They are really talented.

Thanks for the incredible interview.

I really enjoyed your interview and the music.

Thank you for sharing!