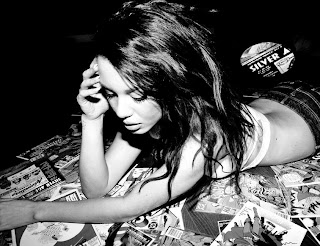 It seems people are conditioned to only receive/digest music when its fed a certain way. I can't give you everything all at once.. Its like a relationship in that way... I have to keep you wanting more.. We as a people seem to be ignoring our hearts, and intuition far too often.


Its as though we can't make our own decisions anymore.. We let others tell us what we like.. I'm not saying everyone is that way. It's just frustrating making music for Facebook likes, twitter followers and youtube hits... Those things didn't exist when I began this journey.. I just wanna make music. I wanna make it, and put it out. I don't mind if it only gets 50 views. And I definitely don't mind if I get a million. I just want to get things off my chest the best way I know how to..it feeds my soul. and when/if people vibe to what I end up with... That's a bonus..that's desert - Amanda

A teaser for you!

2013 is the year I follow through. I want to get this business up and running!. DCT, Syncing, the youth project.
The release of the album is pretty monumental for me.. obviously. I've waited my whole life not knowing that This.. was what I was waiting for. I was waiting for my heart to let me know I could begin it's translation.. lol. sounds weird. but I think a lot of writers can relate to that. We need music to translate for our hearts, our souls..only once we've written, and read over our work, do we begin to understand ourselves.
That's what Syncing is about. It's about letting it flow, releasing, having faith in letting everything all pour out.. then diving in...

Looking retrospectively at 2012, how was 2012 for you? Can you name us some highlights?

2012 was a tough year. I was really lost.. confused, detached.. pretty depressed.. I made the decision to start the album after pretty much hitting a bottom.
I needed to just get it out of me.. so that maybe I could begin to understand.

What will be happening for upcoming summer? Any gigs?

The Album is due in Sept so summer will be full of last minute tweaks and all that fun stuff. I will absolutely be gigging too. Tour dates and any upcoming gigs will be up @ www.facebook.com/amandasilveramusic and www.Amandasilvera.com

Do you forsake all the bad events in 2012 or do you take them for further songs (working with depressive feelings for new lyrics)?

I don't plan what I'm going to write.
It's hard to explain.
I prefer to pick a beat, write and record in one session so that the feelings that inspired the song are still running through my veins when I record it.

Thank you for taking your time, Amanda.
Posted by Crank Box - C. Koppers at 12:54 AM

Can't wait for her new release!

Thanks for the preview!

Best of luck and success,
Kevin

Great preview. Amanda is the bomb.

<3 so grateful for your support <3 i can't believe this is actually happening. So much to do! i am beyond excited to share this project with you guys!!