Story and photo by Chris Koppers 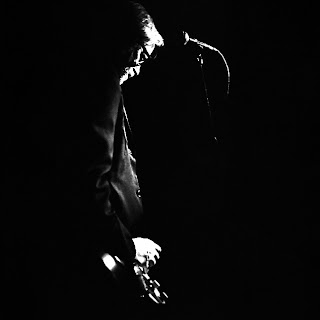 Tom Gray and his buddy Mark Johnson launched a show that exceeded the expectations of their devoted fans around the world. They took us hostage to center of the American South. This soaked in blues-infused earthy vibe penetrated our ears within seconds.  Black Cat Oil is the seventh album of Delta Moon.


I had the opportunity to take some images of Delta Moon. Furthermore, I could spent some time with them for a little chit chat. Originally, I planned to shoot from different angles, but thanks to reality, there was no room to budge. The stage was my sanctuary. I needed some creativity/flexability. No excuses, no remorse. Thus leaning yourself forward was the method to get closer. No space to stroll around. Check. How about lighting? Almost no light at all. One spotlight and that is the end of this story. Aperture for 'wide open' mode and a shutter speed of 1/15 or 1/30. The displayed image shows Tom Gray and his lap steel guitar.

Annotations regarding the used film. The Ilford HP 5 Plus can be pushed to ISO 1600 and the grain is notable. Pushing this bad boy to ISO 3200 is where pain reigns. It was a remarkable photo session. A very sophisticated way to catch the ultimate moment.