Story by Chris Koppers/Simon B. - photos by Simon B.

Teitur, a Faroese singer/songwriter from Denmark, appeared at MTV's you heard it first program and some of his songs can be heard on several motion picture soundtracks, such as "Aquamarine" and "My Super Ex-Girlfriend" - just to name a few.

The story behind the pictures. Courtesy of Simon B.
I am not a dedicated concert photographer. Most people follow my work for what you could call "street photography". It is important for me to have a camera with me at all times and being able to take photographs I think they are worth-taking. This applies to concerts as well, even though it is not always that easy to get camera gear in.
In 2008, I went to a concert of one of my all time favorite songwriters Teitur Lassen in the Lido Berlin, Germany - the third time I saw him on stage, but the first time I was able to take photos. I remember that at the time, it was important for me to take clean, simple/straight shots with strong contrasts, but while I have changed my style and 'evolved' as a photographer, certainly, I would take different pictures today. 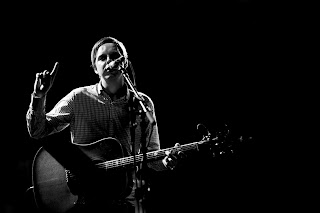 I shot this with a Leica M4 and a Voigtländer 50mm Nokton f1.5 from the second or third row within the crowd, but I think being an 'official' photographer, up on the stage, in the middle of the action, would be much more fun.

Some questions for the photographer:


I use mostly M2s and an M4. Rangefinder cameras just work for me. I like the functional simplicity of the M-System, but other cameras work just as well. And I don't like zooms.
How comes you shot with a Leica M4? 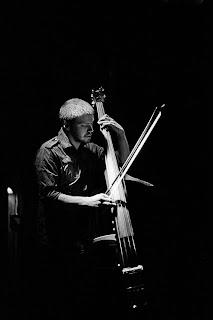 
What is your favorite BW film and who does the film processing for you?

Kodak Tri-X 400 or Fuji Neopan 400. I process my black and white film by myself.

What is your photo philosophy?
Do not leave your house without a camera - take photos of what is needed to be photographed, or something equally trivial.
How does the camera of your dreams look like?

I am pretty happy with my equipment as it is. If it was 100% indestructible it would be even better.
What are your plans for the upcoming months?
I am going to travel quite a bit, to France and Japan, maybe Athens / Greece, and shoot in my home town of Berlin of course. There's also an idea to shoot a project about Berlin's not-so-mainstream electronic music scene.

After reading your article, I have had to go to youtune and checked for the featured artist.
Fantastic music.

Thanks for sharing this story with us.