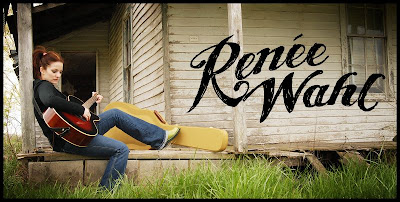 Renée shared some of her thoughts with crankbox-music:

You are currently working on your latest and greatest album "Wild Living" and we would like to learn more about it. Are you able to tell us about the songs, the making of process, and your personal impressions?Why did you name your upcoming album Wild Living?


The album is named for the title track of which the working title was 'Wild Living (South Street Story)'. It’s a snapshot of a time in my life when I lived in Philadelphia, PA and it felt right for that to be the subject of the album. Plus, the artist who created the artwork for 'Cumberland Moonshine' (Jenni Hecker) agreed to do the artwork for this album as well, so we thought she could come up with a great piece of art to represent it. It’s not complete yet, so I can’t give you any insight into that. But she’s such an amazing artist that I’m sure it will be beautiful!

It’s still very early in the process and I’m still deciding on which songs will make it, but I’m very excited about the songs we’ve chosen already. Since this is my second project, I feel much more comfortable and better prepared. 'Cumberland Moonshine' was a self-released debut and there was a lot of learning as I went through that process so I’m even more excited about working on 'Wild Living'!

For my readers, who have not had the opportunity to listen to your recent album "Cumberland Moonshine" - What can they expect from the album as soon as they hit the play button? How much fun was involved for composing Cumberland Moonshine?

Romance, murder, and sinister southern humor! The music fits into the Americana genre and the songs and production pull from country, rock, and blues. They can also expect to hear some of the best musicians from Fats Kaplin to Kenny Vaughan to Bryan Owings.

This was my first full album so it was a new experience to have an actual project in mind when writing and choosing songs. I had a blast working with the musicians and being exposed to the whole process.

You were featured at the Bluebird Cafe in Nashville, TN - Can you tell us something about it?

For those who aren’t familiar with The Bluebird Cafe, it’s a legendary listening room. It has such a great history of having major artists and songwriters, such as Garth Brooks, play there before they were signed to record deals. It’s also been featured in the River Phoenix movie, “The Thing Called Love” (and I’ve got some inside information that it plays a role in the upcoming television series “Nashville”).

Needless to say, a lot of songwriters from all over the world want to play there and the audition process is tough. They hold auditions 4 times a year and less than 10 percent of those who audition move forward. Then you can expect to spend about a year playing the Sunday Writer’s Nights before you have an opportunity to play your own show. So, when I got the chance to play the Sunday Spotlight (an infrequent opportunity to play with a full band versus with 3 other songwriters) I was excited! It was also a bit intimidating knowing that people come there because it is an institution and they want to really listen to the music. Plus, people line up for hours before the doors open just to get a seat…no pressure! People can check out the video of it up on Youtube. www.Youtube.com/reneewahlmusic

No doubt, your music is powerful and stunning and there is no wonder that your songs are aired in European countries. Do you plan a tour through Europe?

Thank you so much! I don’t currently have a tour planned in Europe, but am working on a tour for next year in 2013.

How would you define success?

Success for me is being able to write and play music that affects someone on a personal level, and for them to be entertained when seeing a live performance. I think the best part of what I do is when I see someone singing along to one of my songs and having that connection with them. (And the ability to keep my dogs and cats surrounded with toys…they’ve been fighting for my undivided attention since I started this interview!)

Please pick one and tell us why.

I would love to perform my music ...a) in Germany.
b) on the International Space Station
c) for a non-profit organisation that helps to fight cancer

How about "in Germany for a non-profit organization that helps fight cancer"? I’d love to play in Germany since some of my family came to the US from Germany (in addition to Ireland and Italy). But I’d also love having the opportunity to help a non-profit that researches cures for cancer as well as to help emotionally and financially support the patient and family.

I conveniently left out the ISS since I have a feeling that, while I would love the experience to be in space and on the station, I may be too sick the whole time from the trip. Maybe when human teleportation becomes a reality...!

In Europe, of course! By then, I see myself on a regular touring schedule in the United States and in the process of writing for the third album…maybe even on a tour with a great music artist or band.

Do you have a specific music artist in mind you would like to work with?

Chris Isaak. He is the one artist that I’d say I look to the most as the model for my own career. I would like to collaborate with him on a project or work with him on tour. I would also love to work with Cyndi Lauper. She’s such an amazing artist!

What do you miss in today's music industry?

Originality and experimentation. It still exists, I just don’t think the artists and musicians that are creating some of the best music get the exposure they could or should have because they don’t fit into the right box. And I know that’s not nearly the case outside the US as it is inside. But that’s why I love groups like the Americana Music Association. They work tirelessly to create more awareness of the type of music that wouldn’t stand a chance of making it to major radio stations in the US.

My music is sold directly through my website as well as through Amazon, itunes, and CDBaby.
Posted by Crank Box - C. Koppers at 3:37 AM

GRRREEAT interview.
I have to check her music out!

Thank you for introducing her.

I love her music.

Thanks for sharing the interview with us.

You are the best music journalist.
Kisses,
Rayleigh

Renee is a true songwriter.
One of the best.

All the best,
John G.

Can't wait to see her live on stage.


I love your blogzine.

I'm a new fan of you both.
Love,
Saskya