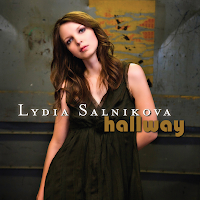 Lydia Salnikova produces rapture galore. Once you have a fugitive glance at her portfolio and you instantly know: "gotta listen to it" feeling overwhelms you.

Lydia had some time to share somewhat for my humble person.

Your first released solo album named ‘hallway’ was recorded in your home studio. What was your main motivation to do this?


After leaving the band Bering Strait in 2006, shaping up my sound as a solo artist and working on a solo album was definitely among my priorities. Between experimenting in the studio and playing live in a trio setting, I began finding my "voice". I tried working with various producers, but for one reason or another those collaborations did not pan out... As I didn't want to keep my fans waiting any longer, I locked myself in my home studio for a few months, and came out with "Hallway" in my hands. If curious, you can watch a short documentary on how "Hallway" was recorded at http://www.youtube.com/watch?v=B3Bn_eXwEfg. This documentary, by the way, won “Best Documentary Film” award at 2011 Maryville Film Festival! Finally, you can hear sound clips from "Hallway" and/or pick up a copy of the album at http://www.lydiasalnikova.com/music/.

Whenever I see you playing piano, I immediately notice your highly skilled level. Where did you learn it?

Thank you, sir. I was classically trained back in Russia, attended a classical music school in my hometown Obninsk. I also lived in Nashville TN for over 13 years and learned from the best session musicians that Music City has to offer.

Who is your biggest fan? NASA? It is notable that your music was played in space. How was your performance at the Space Center in Houston, TX?

I am fortunate enough to have made many friends and fans in the NASA community in Houston TX. Whether they are my "biggest fans" or not... you'll have to ask them. ;-)

The experience of getting to perform at Johnson Space Center in Houston back in March 2011 (and to tour astronaut training facilities) was surreal; you can read all about that in my blog - http://www.lydiasalnikova.com/2011/03/through-the-looking-glass-of-nasa-part-1/ and http://www.lydiasalnikova.com/2011/03/through-the-looking-glass-of-nasa-part-2/. Since then, I have returned to Houston to perform on Yuri's Night (which is an annual celebration of the first manned spaceflight) in April 2011 and subsequently in April 2012. And the mere knowledge that my music had been played in space is... well... mind-boggling. And out-of-this-world. Literally.

I draw my inspiration from the deep well of human emotion. I am not very good at writing "story" songs, not yet anyway... But when it comes to love, sadness, hope, guilt, regret, longing, anguish, joy - I'm so there.

What can our readership expect from you in 2013? Tour? Album?

I am currently working on my 2nd solo album, and I expect to have it out in late 2012 or early 2013. Please visit my website – http://www.lydiasalnikova.com/ - and stay tuned for updates!

You were born and raised in Russia. Do you still have the time to visit your hometown?

Yes, absolutely. I try to go back and visit my family every year for winter holidays. And I try to chronicle my travels in my blog, as much as possible. Here's my most recent Russia report - http://www.lydiasalnikova.com/2012/01/home-for-christmas/.


Thanks for the interview, Lydia.

Lovely lady. You are always picking gems for your blog, Chris.

Thanks for sharing, Chris.

Awsome blog, Chris.
You are the perfect team.

All the best,
Tina

I LOVE her music and I did not know that there was such a quality music blog out there.