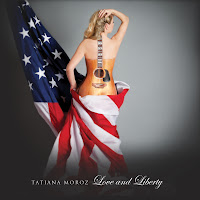 Tatiana Moroz fell in love with the stage. The stage is her realm. Her guitar is her transmitter for her audience. Her thrilling voice with a hint of vulnerability takes her listeners to another galaxy.

Growing up in New Jersey and a graduate of the known Berklee College of Music, Tatiana can softly penetrate your understanding of emotional music and re-write it for you. She commenced singing at the age of ten. Fascinated by Phantom of the Opera, Cat Stevens, Carly Simon and Madonna, she diligently crafted her own style and came up with her first introspective debut album. Tatiana is a hardworking and very dedicated musician and you can witness that by checking her schedule out. She is touring around the U.S. on a non-stop basis. She performs for thousands of stunned folks. Look for Tatiana and her ’68 Gibson acoustic guitar – a singer/songwriter on a top notch level.

You should be delighted by Tatiana’s version of Bob Dylan’s song “Masters of War”, or simply watch her message on youtube, which is named: Make a youtube video.

Music seems to be your remedy whenever the downs of your life strike without mercy. Can we say that fate formed your music style? Moreover, how do you filter your life experience to your lyrics? What comes first for priorities? Feeling or melody?

I have always loved music; it is a great release, but also brings me a lot of pleasure, of course. I have been singing since I was a little girl, and writing songs for quite a while now. I generally pull from life experience, or observations in other friends lives that I think are interesting or thought provoking in some way. Sometimes I put myself in the shoes of someone else to imagine what it would be like to be them. I am a lyrically oriented person, but when I write, both the melody and lyrics flow at the same time for the most part. I later go in and refine what I have written and expand upon it.

We want that American girl in Poland. Apparently, you have founded your first fan group on Polish soil. You have spent some time in that country – do you still plan trips over there? How can we picture you, the American girl surrounded by Polish peers? Heavily armed with a guitar?

I didn't pick up the guitar til I was 16, so it was just a skinny kid with glasses making an appearance over there, nothing all that glamorous. I didn't really have that many opportunities to sing when in Poland. I really just spent a lot of time with my brother and grandparents traveling the country. I attended summer camps, which were always a lot of fun. I was a little socially awkward in the US, for some reason, that didn't happen in Poland.

What makes you smile?

Simple nice things, like when people are kind to each other in every day situations. I love pleasant exchanges with the cashier, or bus driver. It can make such a difference in everyone's day to put good energy out there, and it takes so little to do it.

If you had the opportunity to rule the world for one day, how would you manage 24 hours? What would be the outcome?

I don't know, the world is a big place with complicated problems. I would probably just try to reflect the teachings of Dr. Paul, although I have no idea what one could really do in 24 hours. I would like to say end the Fed and the seemingly endless wars (not just overseas, but also the ones on poverty, drugs, and terror), but I'm not sure that is something that could be done overnight. Maybe I would need a few days :)

What is your current project?

Currently I am promoting my 2 releases "Fall In August" which is a 5 song Live EP available exclusively online, and more recently I just put out my sophomore album "Love and Liberty" at the beginning of the summer. This is a full length record with acoustic performances of 12 songs, including a few covers like "Masters Of War", "Heart of Gold", and "House of the Rising Sun". The 3rd album is already under way, and I hope to release that sometime in the fall. My touring schedule has been very exciting, and in August I will be playing 3 festivals: Liberty Love Fest in Worchester, MA, Paulstock in GA, and Paulfest in Tampa. All my latest news can be found on my site of course, www.TatianaMoroz.com.

Where is the perfect spot for your performance?

I love to play for friends. At Porcfest, Jordan Page and I played at the campsite, and it was just magical. While I love playing for a large crowd, an intimate gathering makes for a memorable time, especially when everyone joins in!

I hope I will be performing! That's all I have ever wanted to do, so I am hoping my fan base will expand, and with it, the message of freedom, sound money, and the non-aggression principle. I want to use my music for good, and there is nothing that I consider a better cause than that of liberty! I love playing "regular" music, but these are unprecedented times in the history of mankind, and I feel amazed every day at the opportunity I have been given to express them through song.

Please tell us somewhat about the “making of” of They will never change. What was the “ignition” to compose that song? How long did it take for completion?

They'll Never Change was a hard song for me to perform; I wrote it all late one night as a response to an argument I had with my mom. It's hard to explain it, especially since it's a personal family dynamic, but I guess it can be hard to see your parents as falliable people. You want them to be the perfect mom or dad like in the movies or on TV like we have been taught things should be. You know, endless wells of love and support. When they fall short of that ideal, or don't see their own flaws, it can result in a lot of hardship for the child. My struggles for peace in the family have led me to be stronger as a person, and I have had to work on myself to break some of the less desirable patterns I learned growing up. Don't get me wrong, I love both my parents, but they have strong personalities, and can be difficult. I am very fortunate to have an outlet. Music is a great sanctuary and release. Performing the song in the studio was pretty difficult, but I was really happy with the emotion expressed in the end.
Thank you very much for taking your time, Tatiana.

Thanks for introducing her, Chris.

The lady got what it takes. Gotta see her live.

Your article is like a novel.
Her music is good.

I hope to hear more of crankbox music!

I love your blog.

That's what I wanted to say.