Cassandra Kubinski - On my way home

Story and interview by Chris Koppers/images courtesy of Cassandra Kubinski 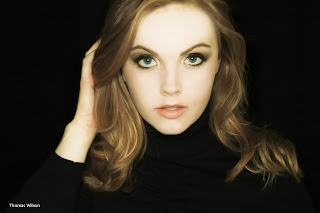 Inescapable sounds with a thrilling voice. A voice that could melt refrigerated butter.
I share Billy Joel's conclusion about her skills: She is a rarity.

Cassandra is a working progress. Unlike other artists, she refines her talents and that gains another wow-effect.

A magnificient lady with tons of potential.
Crankbox-music is honored to publish the interview with Cassandra.


--- Interview ---
"On my way home" is your new single. How much fun was involved for completion?

ON MY WAY HOME was written as a special song for my friends' wedding. It was a lot of fun because I got to interview my friends and ask about their relationship, and then write their story into the song. I also performed the song as their first dance song at the wedding, and we recently released it as a single on iTunes and www.cdbaby.com and did a campaign where a part of the proceeds went to Swish, an organization whose work i support. People can download the song here:
www.cdbaby.com/cassandrakubinski
http://itunes.apple.com/us/album/on-my-way-home-single/id523963217

Trifecta - your album. What can be expected? What do you say about your latest musical feat?

TRIFECTA is one of my songwriting and production teams. They are actually not my main band, but we wrote a bunch of songs together in 2008/2009 that ended up on some cool TV shows, like E! News, shows on MTV and VH1, Jersey Shore and Jersey Couture, and the Much Music Awards in Canada. The team is made up of Anand Gan, Doug Davis, and myself. We write really well together- a lot of the songs on the new TRIFECTA album "one" started with electronic tracks, and i wrote melodies and lyrics over them. The album is now available online at the links below:
http://www.cdbaby.com/cd/trifecta1
http://itunes.apple.com/us/album/one/id541375371

What are you working on right now? Do you plan some gigs or a tour?

I'm about to release my fourth album under my name, Cassandra. It's called JUST BEING MYSELF and I am so, so excited about it. It's full of music to dance to, laugh about, and songs that come directly from the deepest experiences of love. It was produced by Edd Kalehoff, who wrote some of the most famous TV themes in America, like themes for the game show The Price is Right, and Monday Night Football.
I am performing at some smaller appearances right now, but will be opening for larger acts this Fall and hope to tour Europe as well! For updates on the new album, visit www.JustBeingMyself.me

You have been composing incredible music for a while now. What is your favorite song?

So hard to say- I don't have a favorite song of my own, although certain songs are really fun to play, like Just Being Myself and Racecar, and some songs feel so good to sing- a lot of the ballads, like Cradle the Moon and On My Way Home. Other artists I love to listen to who have written some of my favorite songs: Billy Joel, John Mayer, the Dixie Chicks, Taylor Swift, Lady Gaga, Gavin DeGraw...

In a few years, I see myself writing lots of songs and music that is all over movies and TV, live performing in large spaces to fans worldwide, and definitely with some hit singles under my belt! I may still live in New York City, down in the West Village, and probably will have another place or two in a more natural setting. I find nature very inspiring for creativity.
Please pick one and tell us why.
My music is...

I think it's B for me. I write because I am called to do it, because i have to. It has helped me through a lot of emotions, times of my life, and I like to think that my words and emotion help others express themselves in a way they could not do by themselves.

Where do you get your inspirations from?

My own emotions and things I realize; nature, like a gorgeous lake or sunset; dance clubs and dancing; other art, music, and artists. The people in my life inspire me. Also, watching people struggle and triumph and finally WIN really inspires me.
What do you miss in today's music industry?

I miss that there is a defined "path" one has to take to have hits on the radio and become a "popular" artist. 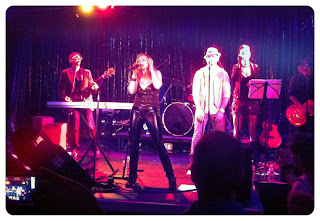 Type in "Cassandra Kubinski" on iTunes or www.cdbaby.com and you'll find all 3 albums, HIDING UNDERNEATH, HOLD THE SUN, and Live At Camp Nashville. Also you can find TRIFECTA's album "one" at both places, and of course the "On My Way Home" single.
Other links:
website: www.justbeingmyself.me
Youtube.com/cassandrakubinski
Facebook.com/casskubinski
Twitter.com/CassandraKubi

Thank you for taking your time, Cassandra.
Posted by Crank Box - C. Koppers at 2:41 AM

Thanks for sharing, Chris.

I checked her out on youtube. She is classy!

I hope to see more articles about her.

She will be a superstar soon :D

Thank you for sharing.

I love her voice.

Keep it up that way.
Cheers,
Marlon

Billy Joel and you are impeccable.

Cassandra is a rarity.

All the best,
David

Chris, you know what it takes.

I hope to see her in GB someday.

She is the wow factor.

Cassandra is so lovely.

Chris, thanks for sharing.

I've never hard of her, but thanks to crankbox I instantly fell in love with Cassandra's music.

Thank you soooooooo much.

No wonder I see her on crankbox, cuz she is so amazing.

Keep up this great blog.

Wow. She is the bomb and your blog is the carrier.

Thanks for sharing.
Randall

She is the woman of my dreams.
Fantastic music. Priceless.

Thank you for sharing, Chris.

Hey everyone! Thanks for the amazing comments here- I'm so flattered! And thanks Chris for posting this. It's an honor to be on Crankbox. I'm so psyched to share my new album JUST BEING MYSELF w/ you all- meantime, you can download the others at iTunes and i hope you'll leave comments there too! xo Cassandra